ORGANIZE THE KITCHEN & PANTRY WITH THESE EASY STEPS 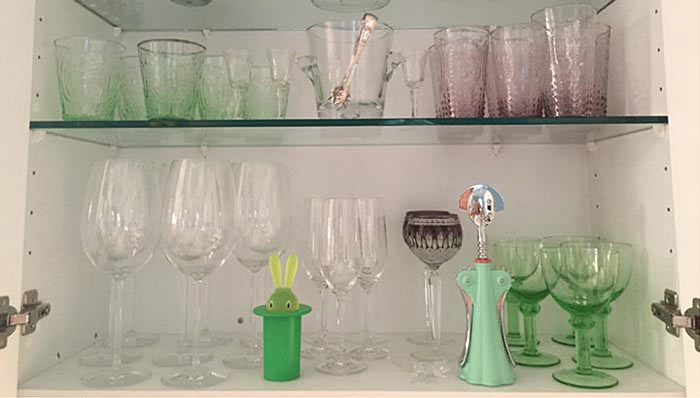 The question I get all the time is how to deal with all the stuff that seems to be proliferating from peoples’ kitchen cabinets and how to decide what to keep and what not to keep.

The good news? Dried spices and herbs don’t spoil. The bad news? After about six months, they loose their flavor.

My advice is to take an inventory of what’s in your spice cabinet, pantry, refrigerator and freezer before you go food shopping, that way you’ll know what you need to replenish. To help speed up the process of cleaning-out the cupboards – not to mention making trips to the grocery store less laborious – here are a few easy-to-do guidelines:

Spices: Organizing your spices can be accomplished in no time flat using my “20-minute Solution.” Start by removing every jar from the cabinet and lining them up, grouping multiples together, in a row with the labels facing toward you for easy identification. Then start sniffing.

Spices, which have lost their aromatic flavor or haven’t been used in more than a year should be jettisoned. You can also “marry” duplicates. If you’re left with a smidgen after combining the repeats, use it or lose it.

The pantry:  It will probably take a bit longer than 20 minutes to tackle the pantry, but the same idea – performing one smaller, more feasible task at a time – applies when organizing the cans and boxes in your pantry; only this time instead of sniffing the contents, examine the product dates and use your own judgment.

Canned Foods: With the exception of infant formula and some baby foods, product dates, such as: “sell by, best if used before, expiration and use by” primarily relate to the quality of the food, or in some cases, the “life of the can,” and not to the actual safety of the packaged foods.

But no matter what anyone tells you, canned foods will eventually go bad. If a can is rusted, swollen or dented, it should be thrown away! I once had a client with a propensity for hoarding cans of baked beans in case of an emergency. How many cans you ask? Lots! Some of the cans were 10 or more years old.

To prove a point, I opened one; the explosion was nothing short of a volcanic eruption.

Dry Goods:  An opened box of dry goods such as, flour, pasta, sugar or rice, may look OK at first glance, but check carefully for weevils and other small insects. Once opened, chips, crackers, cereals and nuts have a tendency to go stale. Any foods, which fall into either of these categories, should be thrown away.

Freezer & Refrigerator: While you probably won’t die from eating a rotten egg, drinking spoiled milk or chowing down on a freezer-burned, shriveled-up, older-than-the-hills Rib-eyed steak, why would you?

When cleaning out your perishable items, you need to carefully inspect previously opened containers, using the “four senses:” smell, taste, sight and the most important one of all – common sense. If something looks or smells rancid or funky, don’t think twice before throwing it away!

The most important thing to remember when organizing and de-cluttering your kitchen is its more about the consequences of eating something that might be unsafe than it is about the clutter and overall appearance of your fridge and freezer.

HINT: The next time you “Buy One/Get One (BOGO), why not donate the second jar, bottle or box of food, which you probably didn’t want or can’t use anyway. In addition to donating the BOGO’s, any unopened food products salvaged from your pantry should be donated to your local food bank.