IT’S A CINCH TO ORGANIZE YOUR BELTS 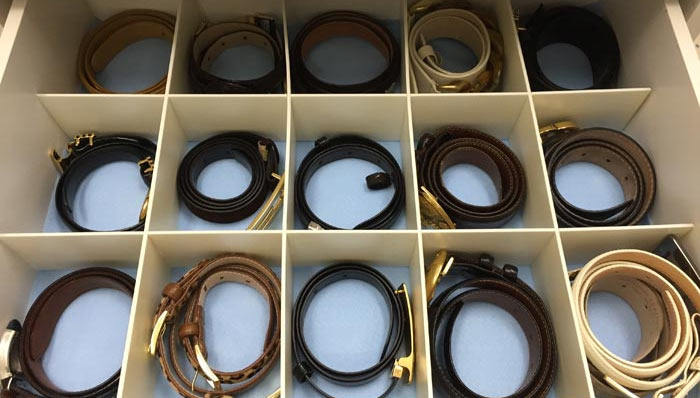 When it comes to fashion, I’m not sure which causes more sartorial conundrum – belts or hemlines – but just when I think it’s time to toss the whole lot of them out, belts come back in style, leaving us with the challenge of finding a place, and way, to store them.

To organize your belts, the first thing you must absolutely and unequivocally do is to sort through every single belt (be judicious!) and decide what you’re going to do with them: keep, replace, repair, toss or donate.

If you don’t like a belt or if it doesn’t fit, get rid of it. If you don’t like the texture, color or design, again, why hold on to it? If the metal buckle is all beat up or tarnished beyond repair, or worse, if the leather is cracked and worn out due to years of use, it’s time to get another belt.

Now that you’ve culled your belt inventory it’s time to put your belts away in a neat, organized fashion. Following are a few do’s & don’ts:

Don’t: Use a tie rack to store your belts. Why not? No matter what the packaging says, tie racks are made to fit ties, not belts. For belts, you need a little wiggle-room to accommodate the different sized belt buckles and widths.

Don’t: Use a large metal ring belt organizer. These are the most ridiculous apparatus ever, forcing you to remove every belt in order to get to the one you want to wear, likely the last one on the ring.

Do: Limit two belts per hook. If you pile a bunch of belts onto one hook, you’ll never wear the belt furthest back.

Do: If you have a belt with an extra-wide buckle, hang it last, on top of the smaller belts, which will make it easier to remove when you’re trying to retrieve the smaller belts underneath.

Do: Organize and store hard-to-hang belts, such as those with decorative buckles or lots of chains, in a drawer. Line the drawer with felt to protect the buckles from getting scratched and separate them with a set of drawer dividers.

Do: Roll-up the belts you plan on storing in a drawer, being careful not to roll too tightly, as that may cause the leather to crack over time.

Do: Think creatively and use under-utilized spaces, such as that hard-to-reach corner or side panel in your closet where there’s just enough room to hang a couple of single belts (one per hook) using a Command-brand hook.

Finally, just because your belts are organized and put away doesn’t meant you shouldn’t inspect them annually. If you’re not using something, don’t like it, don’t need it or if it’s seen better days, don’t wait to take action.